One of these volunteers is Roger Shelton, who does more than just volunteer. Shelton, an avid gardener, also donates his personal garden harvest to his children, friends, neighbors, and even strangers that walk by his house. This year, the bulk of his harvest went to the GAP (Grandview Assistance Program). Shelton estimated that he donated several hundred pounds of fresh produce this year! 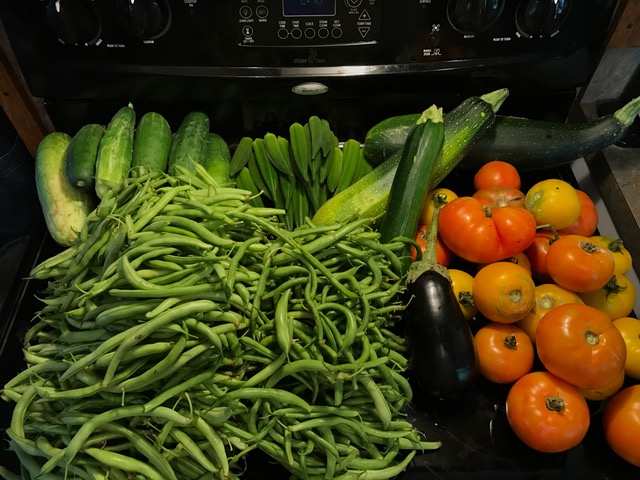 Shelton has been a member at KCCG for 3 years and is in his 2nd year volunteering.

“I purchase about 95% of my seeds and plants and 100% of my fertilizer and insecticides from KCCG. I find their quality of seeds to be excellent and their plants to be the best at very affordable prices.”

Shelton has gardened at various locations around Kansas City including his own backyard, Meadowmere Park in Grandview, Consolidated School District #4’s Bus Barn, and at a rental plot at the KCCG headquarters in Swope Park.  He’s had success growing all kinds of varieties using KCCG plants and seeds but this year, Shelton had the most success growing green beans, which he harvested a total of 16,838!

“Yes, I count them. I enjoy numbers and like to let people know what you can grow in a very small plot. This year, I harvested 16,838 green beans. That is equivalent to about 160 pounds. In one small 4×4 space this fall, I planted “Provider” green bean seeds from KCCG and that plot produces 1,420 green beans, or about 14 pounds.”

The success of Shelton’s gardens can be attributed to his attention to detail, mainly early planting dates. By getting a head start, Shelton makes good use of each planting season from spring through fall.

Shelton has no intention of slowing down. Going into this winter, his plan is to grow more and give away more in 2018.

“Giving away several hundred pounds of fresh produce was unbelievable but I would say that the person that benefitted the most was me. I got a lot of exercise, met some great people, and got so much satisfaction in growing the gardens and giving the produce away. I’ve met a lot of great people at KCCG, not only the staff, but volunteers just like me. I am 74 years old and in good health and plan on doing this as long as I am able.”