“The garden has grown from about 1,000 square feet when we started to more than double that size, mainly because of the commitment of folks in the Ivanhoe neighborhood,” said Terry Davis, Master Gardener who has worked and shared know-how at the garden since its inception.  “And we’ve expanded into an adjacent lot that is now a fruit orchard.”

The garden and the Ivanhoe Farmers Market at Lynwood and Woodlawn – another Ivanhoe Neighborhood Council initiative – were welcome developments with a full-service grocery store missing from the community and nearly half the people in the neighborhood without private transportation.

“When the garden began, most of the work was done by the Master Gardeners, especially teaching interested neighborhood people how to garden successfully at the lots where decrepit housing had been razed,” explained Davis. “The original garden was an inspiration as more neighborhood people took ownership to produce fresh vegetables for their families and the market for the neighborhood. Gardening was contagious.

“Encouraging involvement in the community garden was a way of getting neighbors involved in working together on other community improvement projects,” Davis said. “Two or three people came around the first year as we were putting the garden in and we began teaching successful gardening. Now more than 20 have raised beds in this garden each year and there are other gardens.”

The community garden was a catalyst inspiring more programs to involve the community.

“One young lady has been gardening in the original garden since the second year it was open,” Davis said. “She has acquired other KCCG garden plots too. She regularly sells some of her produce at the market. There’s a high transient rate.  Some may come in and garden a couple years and then move on.  But absolutely, the garden and outcomes demonstrate to the people and the neighborhood they can be successful.” 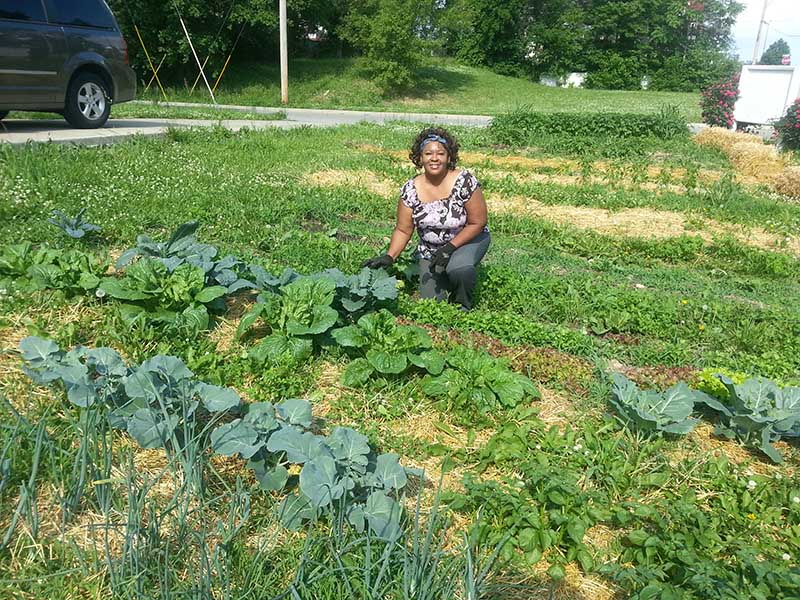 Davis said with the success of the original garden, the Ivanhoe Neighborhood Council wants to see more gardens developed. There are still some large portions of the neighborhood with no garden, but there are plans to develop them.

“All along, KCCG has helped supply fertilizer, seeds, plants, mulch – the critical supplies we need,” Davis said. “Master Gardeners have always worked with KCCG. Most all the people who garden at Ivanhoe get seeds and plants at KCCG.”

The Ivanhoe garden has been able to buy a big tiller and a small one to support the gardeners. When the garden first started it wasn’t fenced and water for the garden was a challenge.

“We tried to drag hoses across streets if the garden needed water,” Davis said.  “Now it is fenced, and the Ivanhoe Neighborhood Council has been able to install three water taps for the gardens. The INC has also installed a wash station for the fruits and vegetables and partnered with KCPL to develop a refrigerated building to preserve produce.

“The INC has tied the successful gardening development process into many things they are doing,” Davis said. “People see how you can follow the same steps to accomplish other things.  The garden was one of the first small projects. The neighborhood wanted to see how it would go.  Master Gardeners came in to teach successful gardening in an urban setting.  Now it is part of the neighborhood psyche.”

Davis said neighborhood kids have gotten involved in the garden too.

“A large majority of the grandparents in the neighborhood grew up on small farms or had some farm background growing things,” Davis said.  “They got more and more interested in the garden and helped younger people get interested. The young people knew nothing about gardening. They had never even seen a potato dug up.

“The boy scout troop that meets at the INC center came out to help dig up sweet potatoes from our 6-foot x 14-foot plot that’s all sweet potatoes,” Davis said.  “They made a real game of it – who could dig up the biggest one.  They came up with almost 400 pounds of sweet potatoes. And INC sponsored a sweet potato pie baking contest.”

Most popular in the garden and most quickly snapped up at the Saturday market are garlic, sweet potatoes, okra, collard greens, tomatoes, cucumbers and cabbage.

The Ivanhoe Farmers’ Market opened in 2012 as an extension of the gardening developments and the award-winning “Grown in Ivanhoe Project.” Since then, the market has made hundreds of pounds of fresh, local, affordable, neighborhood-grown produce available to the Kansas City community.

The garden, originally a teaching tool for best practices in low-cost food production, and the market underpinned major strides in the Ivanhoe community for neighbors to access seasonal fresh fruit and vegetables as they took ownership in reclaiming and rebuilding their community.